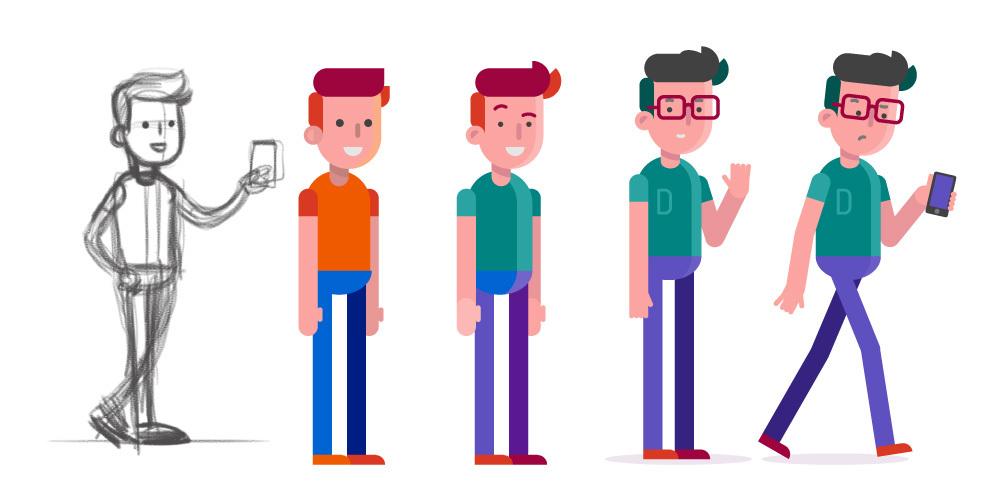 To stay on top of the animation bandwagon, you must keep up with all the latest techniques and trends.

The principles of animation are a collection of important techniques for animators. Ollie Johnston and Frank Thomas, two Disney animators, derived the list of 12 animation techniques in 1981. Nearly 40 years later, these are still being used in classrooms and studios around the globe. But, as technology progresses, these principles continue to update with some new ones.

To master the unique motion skills, you need dedication as well as practice. Let’s look at what these 12 animations techniques are along with the addition of 4 extra methods.

This is one of the first and most important discoveries by Disney animators. It is what gives your animation some elasticity and flexibility. When something hits the ground, for example, it contracts, stretches, expands, then lengthens again, and so on. The better the squash and stretch, the bouncier and smoother your animation looks. However, animators crafting modern computer games hardly ever use it.

Anticipation is a preparatory movement for a physical action such as a punch or a jump. It breathes new life into your movement. It aids in the representation of weight and momentum, initiates critical animations, and leads to a more complete motion. Once you’ve perfected anticipation, you’ll notice that every line, shape, and character you animate has a reason for moving.

Staging is the most basic principle, referring to how to draw the viewer’s attention to a particular shot. Animators use facial expressions, character poses, moods, and actions, as well as their placement in the scene to capture the viewer’s attention. Staging makes sure everything is clear and easily identifiable.

These are the two different drawing processes animators frequently use in animation. Straight Ahead Action means drawing one frame, then the next until the scene is complete. In this approach, animators animate in a sequence. For example, water, smoke, fluids, etc. are animated via this technique.

Whereas, Pose to Pose is the animator planning out the action using a few keyframes and then filling in the intervals. Thus, actions requiring the right timing and motion are animated via this technique.

Follow Through is the principle that describes a brief moment following the main action. It is the concept that an object or body part of a character must never completely stop before the next movement begins. It adds, naturalness, consistency, and elasticity to the movement. Besides, it is also known as Anti-anticipation.

Slow In and Slow Out describes how a moving object requires time to speed up and slow down. For instance, an object or a character moves slowly at first, then quickly increases up speed, and finally slows down. More frames at the start and finish of an action to illustrate the increase and drop in speed make an animation look more lifelike.

In the real world, most actions take the form of an arc or circle. Humans do not move in a straight line denoting the unnatural such as in robotic movements. That’s why the notion of arcs is used in animation to achieve a smooth and fluent movement. The arc technique aids in creating a more natural-looking illusion of motion. It could be a bouncing ball, movement of the mouth during a conversation, etc.

When there is a lack of additional actions, characters turn into mere robots. Spontaneous, unexpected little movements or changes in the facial expressions immediately liven up the character. Secondary action adds more life and realism to the scene.

In animation, timing is the number of frames between two poses. It determines how long an action will take to complete. A blend of slow and quick timing adds texture and intrigue to the movement. So, to master the art of motion, you must first master the art of timing.

Exaggeration is precisely what it sounds like. This idea expands the movement and makes an action, pose, or expression more interesting. It can take the form of changes to a character’s physical appearance or even storyline components. However, you must keep a balance between what needs to be exaggerated and whatnot.

Solid drawing is a necessary component of every animation. It entails drawing with consideration of the 3-dimensional reality such as weight, volume, and balance. Solid drawing requires proper knowledge of the subject. Moreover, it is commonly used in whiteboard animations, sketches, and doodles.

Animators use this technique to create memorable characters that appeal to the audience. No matter whether it’s the hero or villain of the story, viewers must be able to connect with the character. After acknowledging this principle, you can make your character or design stand out.

Shape tweening is what animators use to merge shapes and draw objects. Suppose you want to turn a square into a perfect circle, that is where you need to use this technique. Shape tweening is one of the most recent techniques in multimedia. Using this technique, you can modify a character, change the color or shape, and much more.

This is a straightforward animation technique that ensures the characters are built from simple shapes like spheres, cylinders, boxes, etc. All this is put in place to make sure that the framework remains at the heart of the design throughout the video production process.

For perfect animation, shot types are as necessary as strong designs. Incorrect camera shots and model placements result in a dull shot and animation. Your scenes and story must connect well, intriguing viewers to watch it. Your audience must not have a hard time trying to understand what is happening.

Animated acting is quite similar to pantomime from the silent film era. It refers to situations in which characters tell stories without using dialogues. While using various animation techniques, use simple and clear poses. As a result, you’ll be able to effectively communicate the characters’ feelings and experiences.

Do you want to learn more about the world of animation? Are you unsure about where to begin? Get the best Motion Graphics Services to spruce up your online presence and set yourself apart from the crowd.

Lastly, it’s no hidden fact that the principles of animation are the cornerstones for any animator. Once you’ve mastered these fundamental techniques, you’ll be well on your way to learning the language of animation.